The 2020 Provost Scholarship for Business recipient is announced!

Each year, Detroit Regional Dollars for Scholars (DRDFS) awards scholarships to graduating seniors. Upon completing the three year academic support program, Next Level Scholars, each student receives $4,000 towards the post-secondary institution of their choice. Collectively, the Class of 2020 will receive $500,000 in DRDFS scholarship awards.

This scholarship goes a long way to break down the financial barrier to post-secondary education, and can be transformational in the life of a student. David Provost, Chairman of TCF Bank and former scholarship recipient, was inspired to give back to local students by establishing his own scholarship fund.

DRDFS is proud to announce the recipient of the 2020 Provost Scholarship for Business, Huriel Gonzalez-Hernandez. “I am beyond thankful not only for the guidance from Detroit Regional Dollars for Scholars,  but also to Mr. David Provost for his generosity and the opportunity he granted me to attend Eastern without taking on student debt.” Gonzalez-Hernandez, a senior at Detroit Cristo Rey High School, and first-generation college student, is excited for what his future holds.

On announcement day, Provost visited Detroit Cristo Rey High School to announce the award in person at the morning school-wide assembly. His classmates cheered as Gonzalez-Hernandez was handed an oversized check with his name on it, representing the scholarship award. Following the award announcement, Provost and Gonzalez-Hernandez took some time to talk with each other about EMU, post-secondary goals, and career aspirations.

“Huriel is a very bright student at Detroit Cristo Rey. This [scholarship] gives him the opportunity to expand his skills, to make him a better student, and better member of society. And one day, he can help others.” Provost said.

We are thankful for the opportunity to partner with Provost in awarding this scholarship! We know these awardees will continue to accomplish great things as they navigate life after high school. 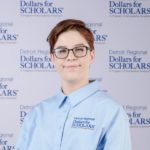 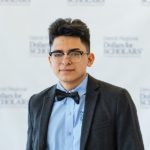 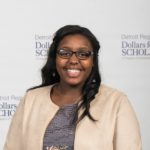 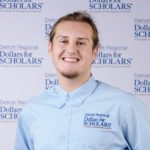